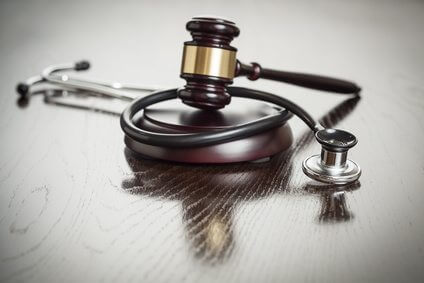 Most of us are fortunate enough to avoid having to interact with the legal system. When we do have an interaction, it can be difficult to know exactly what is happening, what should happen, or what can happen. Many of our clients ask us about whether their doctors or health care providers can go to jail for medical malpractice. Sometimes, it’s because our clients don’t want to ruin the lives of doctors, even if they did something wrong. Other times, it’s because they are angry at the way they are treated, and believe criminal punishment is a good way to deal with it.

The law is generally divided in to two primary areas—civil and criminal. Civil law, which typically includes things like personal injury, medical malpractice, automobile accidents, slips-and-falls and family law, is usually focused on obtaining money for some sort of wrong (except family law, which includes divorces and custody, but also child and spousal support). In most cases, this represents a person’s efforts to be “made whole,” to recover in some financial way for having been wronged.

Criminal law, on the other hand, is meant for punishment. A person who does something wrong can be fined or jailed for that behavior. Examples include parking or traffic violations, theft, assault and murder. These are things that the state and federal government have rules about. Violation of those rules is serious enough for the government to get involved.

These two types of law sometimes interact, but not always. One example that springs to mind is that of O.J. Simpson. He was prosecuted by the state for murder, but a jury (relying on the “beyond a reasonable doubt” standard) did not punish him. Then, a civil case was filed against him by the Goldman family, and a separate jury (relying on the civil standard of “a preponderance of the evidence”) found him to be responsible and rendered a verdict of money owed.

Midwife Convicted After Death of Child in Home Birth

In North Carolina, a midwife entered a guilty plea for obstruction of justice and unauthorized practice of midwifery, a felony and misdemeanor. She was charged with murder of an unborn child, assault, and obtaining property by false pretenses, though those charges were dropped as part of the plea agreement. Her punishment was a suspended sentence of 6 to 17 months incarceration, and 3 years of unsupervised probation.

The midwife assisted a couple with their delivery, despite the fact that she was not licensed (North Carolina requires midwives to be both certified nurses and licensed midwives). The couple knew that she was not certified, though it is unclear whether the family knew it was legally required. Advising them that they did not need medical intervention for four days after the woman’s water broke, the midwife told the parents that the child was fine (though, she told them to lie to the hospital about when her water broke). The child was stillborn and declared dead because of prolonged rupture of membranes, severe infection, and aspiration of meconium. Delivering doctors suspected the baby had been dead for a day before arriving at the hospital. This means the baby was not delivered quickly enough.

In medical malpractice, it is not typical for the criminal and civil systems to overlap. Only where the doctors and health care providers act intentionally or with such a gross disregard for the rights of others will a prosecutor even think of bringing charges. If you have questions about the interaction of civil and criminal law, contact our medical malpractice lawyers at (440) 252-4399 or online for a free consultation.